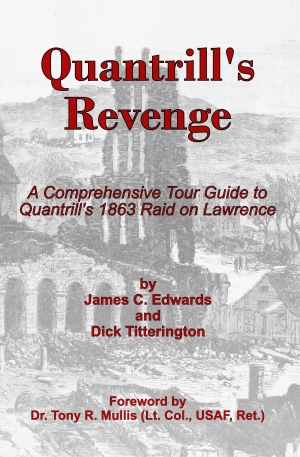 In August 1863, guerrilla chieftain William C. Quantrill led around 400 Missouri guerrillas deep into Kansas to attack Lawrence, “the great hot-bed of abolitionism in Kansas.” Over a four-day period, Quantrill led his men over 90 miles from Johnson County, Missouri, to Lawrence where they burned much of the town and killed over 150 townsmen. After spending 4 hours in Lawrence, Quantrill took an 80 mile route back into Missouri, skirmishing with Union cavalry along the way.

This tour guide contains 49 tour stops and follows the route taken by Quantrill’s guerrillas during their 1863 raid on Lawrence, Kansas. The tour begins in Johnson County, Missouri and goes west through Jackson and Cass Counties, Missouri, to the Kansas state line. The tour enters Kansas just north of the boundary between Johnson and Miami Counties, Kansas, and continues heading northwest through Johnson and Douglas Counties, Kansas, on the way to Lawrence. As you might expect, most of the tour stops are located in Lawrence, Kansas. After Lawrence there are a number of tour stops following the route taken by Quantrill’s guerrillas on their way back to Missouri as they were pursued by Federal troops. Altogether the tour covers a distance of approximately 175 miles from start to finish.